From the Desk of Honor Raconteur 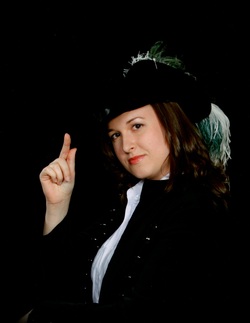 About the Author
Ever since I was a toddler, I have been making up stories. I’d entertain anyone willing to listen to my wild fantasies about unicorns and gargoyles and amazing people. At 13, I started writing the stories down. At 23, I finished the first book that was, in my opinion, good enough to publish.

I spent three years trying to publish my book, Jaunten, the old fashioned way. The problem was my story was outside of the norm for young adult fantasy – it didn’t have vampires or the supernatural in it, it was clean enough to earn a PG rating, and there wasn’t any dark overlord to defeat. No literary agent would pick it up because it didn’t fit the “fantasy formula” that all of the popular books did.

I put the idea of having my book published off to the side for a while as I finished a Bachelors in English at Middle Tennessee State University. But as I worked on my third degree, the idea of being published came back to me. This time, while working as a paralegal, I had a better grasp of the laws involved of doing self-publishing. For six months, I did a great deal of research in how to do self-publishing the debt-free way.

It was hard. I was working full time, going to school full time, and living on my own. I never really had a break. I was always working on something. At times I felt like my brain would just go into meltdown from having to learn so many different things to make my idea work.

After six months, I thought I knew enough to publish myself. I put Jaunten out as an ebook, created a website and forum so that fans could communicate with me, and spread the word as best I could. Within three months, I was selling internationally. Within six months, I was making enough to quit my day job and sit at home, writing full time.

After six months of writing, publishing, and building up a reputation, I started to be approached by other people wanting to emulate what I did. I soon realized that there was a niche out there waiting for me to fill it—a place where original fiction could be published and released into the world. As of February 2012, I started my own publishing house, called Raconteur House. Since that point I have signed on four additional authors (not including yours truly) and am attracting more in a steady stream.

I have continued to write and publish the rest of the series through my House. When I’m not writing or editing, I like to go out into the community and give presentations of how to be an author. It’s actually really fun to talk to all of these people who want to be authors. Most people think that you can’t make any money being an author—actually, you can. And you can do quite well. It’s just a matter of working really hard, having a little talent, and knowing how to market your books. All I’m doing with these presentations is giving people the know-how to make their dreams come true.

While it’s true that you don’t need a college education to be an author, I encourage everyone to be as educated as possible. I have a lot of experience and education that most people don’t, and that’s what gives me an edge in writing. I’ve lived in places as obscure as Tehachapi, California and other places as large as Salt Lake City, Utah. I hold three different college degrees. I practice two different martial arts. I think I’ve tried every life experience that came my direction. All of that is incorporated into my books, and that’s what gives reality to my worlds and characters.

Even if I abruptly stop selling books tomorrow—which I don’t see happening—I would still continue to write. Creating characters and worlds is that much fun. Once you start, you become quickly addicted.